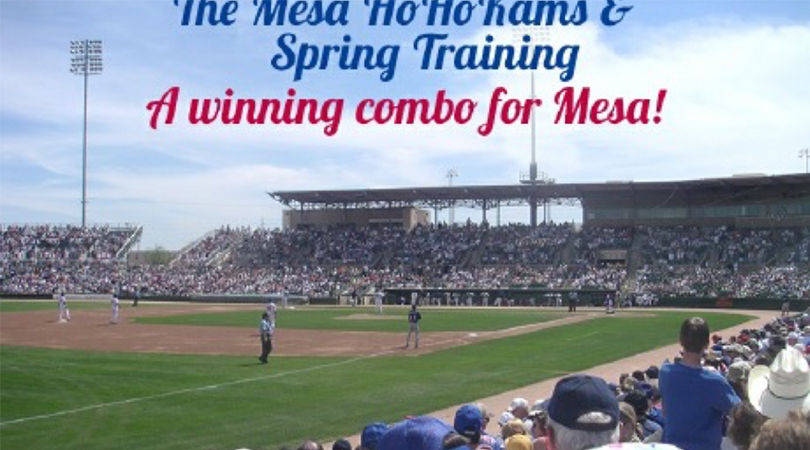 The Mesa HoHoKams and Spring Training – A Winning Combo for Mesa!

There’s nothing quite like the excitement that grows when Major League Baseball Spring Training begins in the Valley. Long time Arizona residents know that the crack of the bat, the so thud of a baseball in a catcher’s mitt, and the smell of freshly mowed grass mean that the best part of the year has arrived, bringing not only amazing Arizona weather, but all of the joys of baseball to the senses. It takes a village to bring Spring Training to the Valley, but you might not know that the Mesa HoHoKams are a major player in the success of Cactus League Baseball.
An important part of Spring Training in the Valley, the Mesa HoHoKams deliver more than $200,000 annually back into the community through the Hohokam Foundation, generating revenue via volunteer efforts during Spring Training. By providing parking management, gate operations, and ushering services, the Hohokam Foundation is able to direct funds directly back into the community and youth sports in the Valley.
Vincent P. Di Bella, President of Saemisch & Di Bella, has been a member of the Mesa HoHoKams since 1997 and values the community benefits brought to the Valley through their efforts. He is proud to be a part of the Mesa HoHoKams who provide so much advantage to the City of Mesa and its surrounding communities.
Arizona is now synonymous with Spring Training, but Major League Baseball first brought spring baseball to Mesa, Arizona in 1952, when they brought in the Chicago Cubs to what was then Rendezvous Park. In 1996, Rendezvous Park was demolished and replaced by a brand new, larger stadium at Hohokam Park. With 7,500 seats and room to accommodate 2,500 more fans in the grass, Hohokam Park quickly became a favorite spot for Arizona baseball fans to enjoy all the spoil s of spring ball, with the added benefit of a rich history.
Hohokam Park derives its name from the Hohokam Indians, who are some of the earliest residents of the Valley. They are credited with developing a sophisticated system of irrigation canals that were formative in creating some of today’s modern canal systems. While the reasons for the disappearance of the Hohokam Indians is mostly speculation, it is thought that factors such as drought and disease might be to blame. But today we celebrate the Hohokam Indians in Hohokam Park, situated only a few blocks away from the Mesa Grande Ruin.
In 2013, the Chicago Cubs played their last game at Hohokam Stadium, ending an era. But there was no need for fans to worry. The Oakland A’s first began playing Spring Training at Hohokam Park in 1977 before moving to Scottsdale, but have recently returned in 2015 to a newly renovated, state of the art facility at Hohokam Stadium. Fans can enjoy such amenities as a brand new high definition scoreboard and new seating while still enjoying the intimacy and hometown feel of the old Hohokam Park.
Spring Training means more to Mesa, Arizona than just providing fans enjoyment of the game. The season delivers valuable business
and income for the city, bringing in thousands of out of town visitors every spring. The next time you walk through the gates at Hohokam Stadium to take in America’s pastime, you can not only enjoy baseball surrounded by the rich history of the Hohokam Indians, but also know that your attendance is supporting youth sports and the community at large.
Next post Play It Safe This Summer!