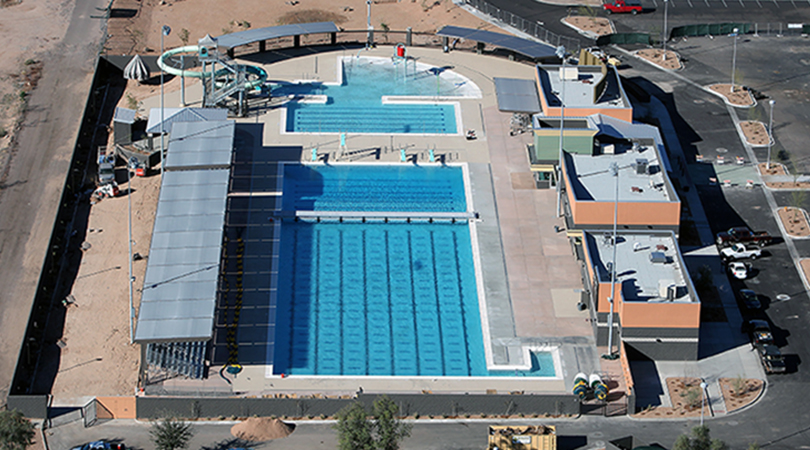 With Summer Olympic fever hitting the nation in a big way, you might not realize just how important Arizona’s own local pool facilities are for some of the nation’s top competitions, most notably the ones leading up to the highly anticipated 2016 Rio Olympics. Nestled right in the heart of Mesa, Arizona, the Skyline Aquatic Center features a racing pool with eight 50-meter racing lanes and a diving tank with one and three-meter diving boards. Early community plans for the aquatic center focused on luring a variety of athletic competitions from all over the country right here to Mesa, and that hard work and planning has paid off in a big way.
For the first time since 1996, USA Swimming has brought its Grand Prix series back here to Arizona, bringing swimming’s biggest names to the Valley as they forge their path to the 2016 Rio Olympics. For locals looking to support our Olympic athletes on home soil, nothing could be more exciting than seeing the likes of Ryan Lochte, Missy Franklin, and of course, Michael Phelps, as they qualify in Olympic trials. And this past April 14 – 16, all eyes were on Skyline Aquatic Center where Mesa hosted the top names in swimming as they competed for Olympic – qualifying times. A major highlight of the competition was the matchup of Michael Phelps and longtime rival Ryan Lochte as they competed in the 100-meter butterfly. In his highly anticipated return to competition, Phelps was able to boast a victory, finishing the evening ahead of Lochte by 52.38 seconds, and reasserting himself
as an Olympic force.
Bringing the Grand Prix series to Mesa is a huge local accomplishment for both the City of Mesa, as well as competitive swimming on a grand scale. Not every pool is an Olympic qualifying facility, and it is only with the ongoing support and commitment to moving forward from the City of Mesa that this project was possible. Saemisch & Di Bella Architects are proud to have played an integral part in designing and building Skyline Aquatic Center and the Mesa Aquatic Complex, bringing swimming and water recreation to the Valley, along with continued opportunities to bring more competitive swimming events to Arizona.
Post tags:    aquatic facilities    municipal pools    school aquatics facilties    school pool    Tag one    Tag three    Tag two
Previous post Empire Southwest Opens New Facility!
Next post We Are Adaptive Architects!