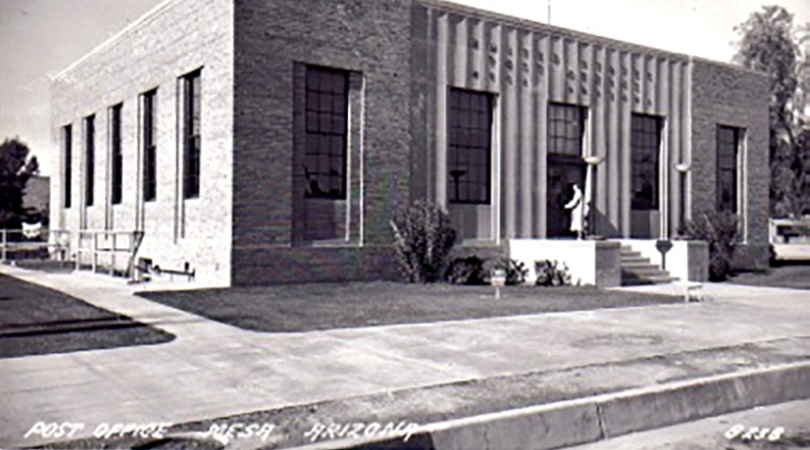 “When you strip away the rhetoric, preservation is simply having the good sense to hold on to things that are well designed, that link us with our past in a meaningful way, and that have plenty of good use left in them.”
~ Richard Moe, National Trust for Historic Preservation

Preservation and/or rehabilitation of our significant historic buildings is incredibly important. In their glory days, these buildings were symbolic of progression towards a bright future; today they are windows to the past and a lasting connection to city legacies.

One such building in Mesa, Arizona  is the Historic Post Office, also known as the “Federal Building” (bottom left). As indicated in Mesa’s Historic Property List: “The Federal Building was built in 1937 by the Federal Government Department of Treasury to become Mesa’s first 1st-class post office, and was one of the finest buildings in the City at its completion.”

Through the years,the post office experienced a series of modifications and functions. In 1960, the building was expanded to include a two-story extension and loading dock (bottom right), and when the post office moved to its current address at 135 N. Center Street in 1970, it was re-purposed to serve a new role. The federal government’s most recent use of the building was to house the local U.S. Forest Service offices before the building was transferred to City of Mesa ownership and was subsequently recorded on Mesa’s Historic Property Register in 2004. An adaptive reuse of this historically significant building has been planned by the City along with the architectural team of Saemisch Di Bella Architects and Historic Streetscapes, led by Ron Peters AIA, who is a preservation architect. Current plans carefully balance the building’s history against the needs of the end user, appropriately Mesa’s Historical Museum, to provide ideal museum display space in Mesa’s cultural center.

Links to the Past.

The original wood floor, buried under layers of remodels, was recently found to be severely damaged. But a portion will be salvaged and re-used as the finish on the new reception desk that will greet museum visitors upon entry. The building’s original entry doors and a window long hidden behind a wall, both circa 1937 were also discovered and will be similarly highlighted in the new design to link our past and future. And while an overhead catwalk originally used to safeguard the mail and maintain the integrity of internal postal operations was removed in the 1960 expansion, close inspection today reveals the remains of where it was once connected high above the workspace below.

Saemisch Di Bella Architects built our business on producing sensitive adaptive-reuse projects, and we’re proud to have completed a number of these in our own historic downtown including the building we own and occupy at 48 W. Main Street. Built in 1895 and originally known as the Barnett Building, it’s one of the oldest in the area. Other projects completed include the Arizona Museum of Natural History, the C.W. Berge Building, the Nile Theater, and the offices at 101 W. Main, as well as tenant improvements for Sweet Cakes Café and Nunthaporn’s Thai Cuisine restaurant. For those interested in the history of Mesa’s downtown, please check out the Mesa Historical Museum website, and consider taking the Historic Downtown Walking Tour of Mesa, found here as prepared by the Mesa Preservation Foundation. 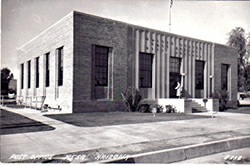